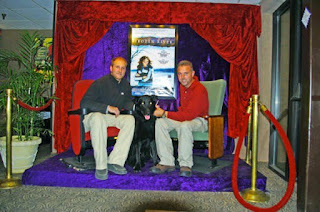 At the tender age of 15, Christopher Banke founded the Algemeiner Schutzhund Club. He knew even back then that he had found his calling; something he would always want to do. While there, an experienced trainers helped him focus on German Shepherds and, following that, one of the most prominent dog trainers in the country helped him improve his training skills even more. With that experience under his belt, he opened his own dog training business in northern Vermont when he was just 19, which he called “Christopher Banke Protection Dog Trainer.”

In the three decades since then, he has trained many dogs and he also has coached and assisted a number of competitive dog handlers. Christopher Banke also founded his own breeding kennel, with many of those dogs entering competitions at the local, state, regional and national levels. In addition, Chris as trained many dogs to work in law enforcement and the entertainment industry. For example, he and his own dog, “Dino von der Maineiche,” appeared in an Oscar-nominated movie in 2008, right after the two had received the second highest Schutzhund/IPO III in the United States with a trial score of 297.
Posted by Christopher Banke at 01:13